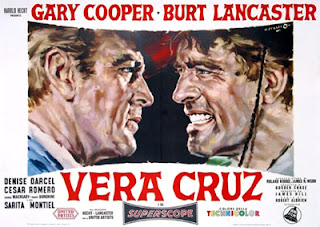 My character Cincinnati is an amalgamation of some of my favorite on-screen badasses but his look was almost completely influenced by Burt Lancaster’s character, Joe Erin, from Vera Cruz. There’s a lot of Joe’s swagger and attitude in Cincinnati as well but if you want to know what my infamous gunfighter looked like, just watch this Cooper/Lancaster classic. I don’t know if it’s ever been officially noted but I’m willing to bet George Lucas was also hugely influenced by Lancaster since Joe Erin not only looks just like Han Solo, he acts exactly like him, too.

Vera Cruz is epic in scope with huge battle scenes and countless extras but the story is relatively straight forward and with an running time of just over an hour and a half, it has a pace more like the B-westerns I love. Gary Cooper is very Gary Cooper-y as the white-hat wearing Benjamin Trane but simply can’t compete with Lancaster’s awesome performance as Joe Erin. Lancaster steals the show more than once with this cocky, white-toothed delivery and his phenomenal gun-spinning tricks. He is the epitome of cool and well worth the price of admission alone.

I like Vera Cruz just fine, especially since it’s only around 90 minutes. It’s the type of movie that, if it were made today, would surely be bloated to three hours simply to justify its grand scope. I like the fact that it’s beautiful to watch but hasn’t had a convoluted plot and inane dialog shoe-horned into it just to make it more “epic.” Hell, Lancaster’s performance does that all by itself.