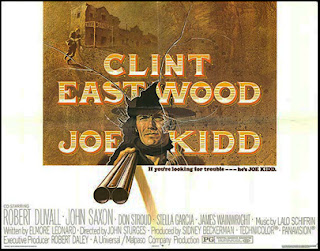 An argument could be made that every Clint Eastwood Western has had an influence on my writing but one in particular stands out above the rest. My first novel, TEMPERANCE, wouldn’t exist if it wasn’t for Joe Kidd. While watching it for the first time a few years ago, a certain scene hit me and gave me an idea for a whole story. When Eastwood is holed up in a church and quietly takes out two guys with his bare hands (he drops one through a trap door in the ceiling and crushes the other one's skull with a swinging, water-filled pot—it’s awesome!) I wondered what it would be like to have a main character who didn’t carry a gun go up against a whole town of men who did. The idea germinated and when I decided that I’d never be able to get a screenplay produced, it became my first novel.

It’s really no mystery why I happen to like Joe Kidd so much. Elmore Leonard wrote the screenplay (no, it wasn’t a screenplay based on his book, he actually wrote the thing), Lalo Schifrin wrote the score (his Bullitt soundtrack is one of my all-time favorites), John Sturges (The Magnificent Seven, The Great Escape, etc.) directed it and then, of course, there’s Clint Eastwood in one of his best performances.

As a side note, something just came to me. I’ve always said that there are two types of people: the ones who think Revolver is the best Beatles record and the ones who think Rubber Soul is. I think this also applies to Westerns. I find that there are John Wayne people and then there are Clint Eastwood people. I happen to be a Rubber Soul—Eastwood. Leave me a comment and tell me what you are.

Anyway, Joe Kidd oozes Elmore Leonard with a plot about natives fighting with the white man over land and of course his dry humor which Eastwood is perfect at delivering. Robert Duvall is great as the disgruntled land owner Frank Harlan and his gun-toting cronies could have been pulled from the pages of any of Leonard’s books. Hell, there’s even a shot where a train goes through a building. What else could you want?

Joe Kidd is fun and over-the-top and although it may not be as epic in scope as some of the films Sturges is known for, it sill is a great collaboration of some of the best creative people of the time.