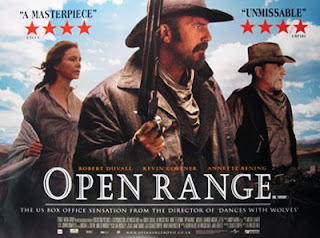 Open Range isn't just one of my favorite westerns, it's one of my all-time favorite movies. From its breathtaking scenery to Michael Kamen's beautiful score, Open Range has the feel of a classic epic with the intimacy of a micro-budget drama and the intense violence of a war documentary. It's obvious that Kevin Costner poured everything he had (he even shot a portion while suffering from appendicitis) into what I consider to be his best film and I'm sill amazed it doesn't get the recognition it deserves.

Robert Duvall is perfect as Boss Spearman—a character not unlike Lonesome Dove's “Gus”—and an ideal complement to Costner's ex-gunfighter, Charley Waite. Charley is second only to Eastwood's William Munny from Unforgiven when it comes to harboring a pent-up urge to un-holster his gun and unleash some extremely satisfying vengeance. Costner's character does have more depth than Eastwood's, especially when it comes to how he acts toward Annette Bening's Sue Barlow. Their relationship is tentative and sweet and has a childlike innocence that perfectly contrasts Costner's hidden violent tendencies. Bening is an extremely strong female character (do you see a pattern forming in the films I dig?) who does something at the climax of the movie's final gunfight that I wish more characters would do.

Speaking of the final gunfight—damn! It's the most brutal and realistic sequence from any western I've seen and absolutely on par with the bullet-ridden bank robbery in Michael Mann's masterpiece, Heat. Much like the final confrontation in Unforgiven, we finally get to see what Charlie Waite is capable of as he and Boss Spearman take on an evil ranch owner and his gun hands. I've stolen a lot from Open Range but one of the things that’s been on my list that I finally used in The Gunfighter Cincinnati was the free-the-hostage-by-sooting-the-bad-guy-in-the-face move Costner employs during the climax of this film. At one point he's so angry it looks like he's punching the bullets from his Colt into the bad guy. Did I mention it was brutal?

Open Range is perfect. I've already stolen so many ideas and nuances from it but I'm not about to stop. If you haven't seen Open Range, drop what you are doing, buy it and watch it. I promise it will make your day. 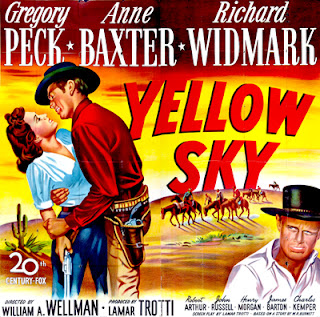 The three top-billed stars in Yellow Sky directly influenced three of my favorite characters from my TEMPERANCE TRILOGY. With an extended sequence shot in Death Valley’s salt flats and a story that takes place in a ghost town, Yellow Sky not only has a unique setting for Westerns of its time, it has a unique story as well. While a lot of Westerns in the ‘40s were slightly cartoonish and seemed to be geared for a light-hearted crowd, Yellow Sky stands out as an escape to the dark side where rooting for the bad-guys doesn’t seem all that bad.

Gregory Peck is outstanding as a bank robber called Stretch who leads his band of miscreants across a barren landscape trying to outrun the law. Dazed and near death, Peck and his crew come a cross a nearly-abandoned ghost town with a population of two — an old man and his pistol-packing, tomboy granddaughter played by Ann Baxter. Baxter’s character, who calls herself Mike (I love that) is one of the strongest female leads in any Western to date and was the basis for my character, Abigail Gibson. She’s tough, she’s great with a gun and — in the words of the movie trailers of that era — she’s all woman. Richard Widmark’s clean-cut, all-black-wearing gunfighter called Dude (it seriously has the best character names of any Western) is only concerned with the almighty dollar and will do anything to get it — not unlike my own gunfighter Cincinnati.

Yellow Sky is fun, it’s different and it’s well worth a screening if you love Westerns. I might just go watch it again to see what other ideas I can “borrow” from it. 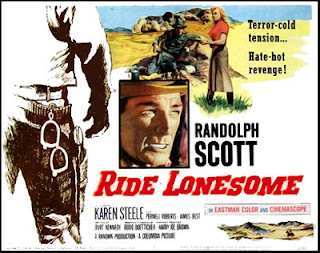 If TEMPERANCE was my salute to Unforgiven and A THOUSAND YESTERDAYS was my salute to Butch Cassidy and the Sundance Kid, then my newest novel THE GUNFIGHTER CINCINNATI is my tribute to Ride Lonesome. My second favorite of the Scott, Boetticher, Kennedy collaborations (Seven Men from Now is still my favorite), Ride Lonesome has their signature straight-forward, no-nonsense plot seasoned with awesome visuals and a fascinating group of characters.

Randolph Scott’s Ben Brigade is a grittier, harder version of the likably steadfast character he’s known for. Although he usually plays someone with a mysterious past, the reveal at the end of Ride Lonesome that shows Brigade’s motivation has a lot more weight to it than usual. Scott is joined by an excellent group of multi-layered characters but both Pernell Roberts and James Coburn stand out as the morally-questionable anti-heroes I love to watch. Karen Steele is adequate in her role as the damsel in distress and only has one instance of screaming like a crazy person.

I nodded to a lot of things in Ride Lonesome in my newest novel. From the obvious group of miss-matched characters thrown together in a quest, to the dim-witted criminal being dragged along for the ride. Even the contorted hanging tree in Ride Lonesome made its way into the pages of THE GUNFIGHTER CINCINNATI. Ride Lonesome also has one of my favorite shots combined with one of my all-time favorite lines. As Ben Brigade and Pernell Roberts’ Sam Boone ride across a valley, a group of Indians are slowly revealed atop a ridge behind them. In the foreground, the two men are discussing Karen Steele. Boone says, “I guess she’s about the best overall good-lookin’ woman I’ve ever seen.” Just before Brigade acknowledges the riders, he replies, “She ain’t ugly.” 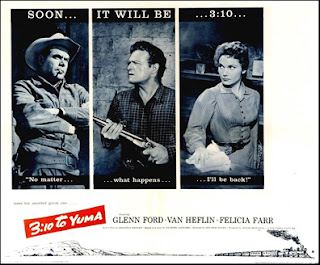 Elmore Leonard was a master. He wrote so many great books and short stories and an amazingly high number of them were made into great movies. Although I love his crime novels and the movies and TV series based on them—like Justified, Jackie Brown (Rum Punch), Out Of Sight, Get Shorty and even the newest adaption, Life Of Crime (The Switch)—my favorites are still his Westerns. Hombre, The Tall T (The Captives), Valdez Is Coming, and the Elmore Leonard scripted Joe Kidd are some of my favorites but the top of my list has got to be the original 1957 3:10 To Yuma. Masterfully shot, beautifully scored and amazingly acted, 3:10 is a great movie.

Let’s just get down to it. Glenn Ford’s performance is a masterpiece. He’s evil, he’s cunning and he’s ruthless but in spite of that he’s still one of the most charming and likable characters ever put on screen. Glenn Ford’s Ben Wade is the devil incarnate. The interplay between Ford and Van Heflin’s Dan Evans is tense and complex and has yet to be matched in any movie since. There are only two women in 3:10 but both Leora Dana and Felicia Farr are strong and beautiful and can stand their own.

3:10 To Yuma is a rough adaptation of Leonard’s short story but with all of the added backstory and changed names, the spirit of his voice still comes through. Aside from the more obvious influences to my writing—like the despicably likable bad guy—my favorite takeaway was inspired by Ford’s story about a sea captain’s daughter from San Francisco who, “… had the greenest eyes. I used to look into them and they’d just change colors. They’d get all fiery, you know, all the colors of the sea …” Abigail Gibson from my TEMPERANCE TRILOGY has big green eyes because Ben Wade convinced me that they should be.

The 2007 remake of 3:10 is good. It was shot well and the performances are fine but it simply can’t hold a candle to the original. Buy 3:10 to Yuma. Don’t hesitate, just go buy it. And don’t settle for the DVD. The Criterion Collection Blu-ray is amazingly remastered and should be the only way you watch it.