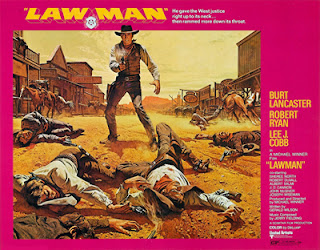 Lawman staring Burt Lancaster is one of my most influential Westerns yet seems to be one of the most overlooked by fans of the genre. Fresh off the heels of Peckinpah’s Wild Bunch, Lawman takes another big step into the darker, bloodier '70s version of the Wild West. With quotable dialog that easily rivals films like Tombstone and The Good The Bad And The Ugly, Lawman is violent, ruthless and complex and has left its mark on every novel and story I’ve written. Even the description in my book TEMPERANCE of a dime novel cover featuring the legendary killer Duke Valentine is a literal description of the Lawman movie poster.

Burt Lancaster’s Marshal Jared Maddox is also the basic template for my character the gunfighter Cincinnati. He has a code and a set a rules he calls the law and no amount of reason or sense can sway him from it. Maddox is so blinded by the law he’s created he becomes more of a mindless killer than the mindless killers he’s after. Robert Ryan plays Marshal Cotton Ryan, an old acquaintance of Maddox who tries his hardest to be the level-headed go-between for the bloodthirsty lawman and the reasonable rancher who employs the men he’s after. At one point Ryan tries to sway his marshal counterpart’s decision by saying, “There’ll be dyin’.” Maddox simply replies, “It’ll be their doin’.”

Lawman is dirty, it’s harsh and its ending will catch you so off guard that it’ll keep your mind busy for days. I absolutely love this movie and wish more people would get to know it. If you’re a fan of the darker Eastwood films like High Plains Drifter and Unforgiven, Lawman is a no-brainer.

Posted by Matt Prescott at 11:19 AM No comments: 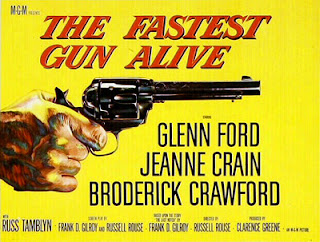 Another lesser-known film that hugely influenced my first novel TEMPERANCE, was The Fastest Gun Alive. From its slow-building tension to its clever reveals, Fastest Gun served as my template for creating a character whose main adversary is his own reluctant self control.

The amazing Glenn Ford truly steals the show as George Temple, a simple shopkeep who obviously has more to him than his humble station in life would allow. If the proverbial devil on Ford's shoulder is his own past, his wife, played by the lovely Jeanne Crain, is his angel. She stands alone as his strong voice of reason without being a whining nag like so many movies of that era would have her be. Broderick Crawford's Vinnie Harold isn't the most multi-layered Western bad guy but he's gruff and narrow minded enough to serve his purpose.

The Fastest Gun Alive may not be a perfect movie—the first act's silly but brief dance number is the type of cringe-worthy kitsch that only the '50s could offer—but it still stands as a great character piece driven by Glenn Ford's engaging performance. Fastest Gun is quick, fun and if it were a frilly drink with a tiny umbrella, it would be hard to put down. 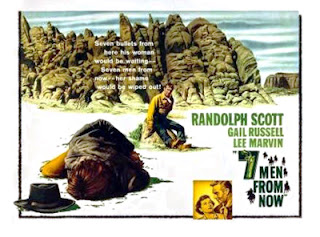 I watch a lot of Westerns and thought I should share some of my lesser-known favorites with you. Not only is Seven Men From Now one of my all-time favs, it's also had a huge influence on every book I've written. If you read TEMPERANCE then watch Seven Men, the nods I make should be plainly apparent.

Although I love every collaboration between director Budd Boetticher and actor Randolph Scott, Seven Men is by far the coolest of their many films together. The opening scene between Scott's ex-sheriff character and the first two of the seven is full of tension and is more badass than most things in theaters today. Scott is joined by Gail Russell's big blue eyes—she play's a strong female character unlike a lot of women in Westerns of that time—and Lee Marvin as a likably sinister gunfighter who steals every scene he's in.

Seven Men From Now stands out as a fast-paced, intense romp with an awesome twist that is sure to make you want to watch it over again.